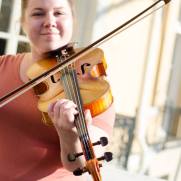 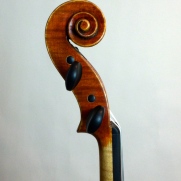 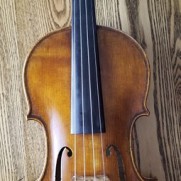 “Besides its being beautifully and meticulously crafted, the thing I love most about my Jon Price violin is its versatility. On the one hand, it’s very resonant—apt for playing Romantic concerti or virtuosic solo works in medium-to-large spaces. But it’s not only great for these types of performances: the violin can also have a very subtle sound, perfect for smaller, more intimate settings, as when I’m playing chamber music or Baroque and early-Classical pieces. I wanted and instrument that could do anything well, and I found that in this violin.” -Ari Korotkin

“I was fortunate enough to have met Jon while working at Psarianos Violins, and, after having worked with him for several years and witnessing firsthand his skill as both a luthier and repairman, as well as the passion and care he infuses into all of his work, I knew that he was exactly the right person to make a viola for me. Jon took into account both my body structure and the type of playing I would be doing, and he consulted and updated me every step of the way. In the end, he created a beautiful instrument which has perfectly suited me and my musical needs, and he has continued to be there for me for any sort of necessary adjustment or maintenance. I am continually complemented on its tone and depth of sound, and I couldn’t be any happier with this incredible viola.” -Kathy Blanchard

“There comes a time in every violinists life that your student violin is not going to cut it anymore. This realization came to me when I was studying violin in university. My violin teacher suggested that no amount of practicing would make the current sound of my violin any better..my quest began! I tried a number of different violins..new, old, and everything in between. I quickly became overwhelmed with the choices as I liked different qualities about each violin I tried. When I first picked up the Jonathon Price fiddle I knew there was no going back. I played one D Major scale and was sold! It was as if this violin was made especially for me. I had a lot of instruments to choose from but this new instrument really stood out from all the rest. Jonathon Price is very helpful, knowledgeable and friendly. If you are seriously looking for an upgrade I would highly recommend trying one of Jonathon’s violins.” -Victoria Turner

“I first met Jonathon Price at a gig he played for the band Steppin’ In It. After the gig, I talked to him a bit and found out he was playing a fiddle he made himself. He let me try it and I was impressed! Several years later in 2012, when Jonathon was working at Psarianos Violins, I learned he had one his own newly-made violins for sale. After trying it, it was an easy decision to buy it. His violin has been my constant companion through playing with the Motor City Sidestrokers and at the Michigan Renaissance Festival ever since.” -Bob Mariotti